We Are Now Back Up And Running At Anna Raccoon

Please redirect to www.annaraccoon.com
Posted by Guthrum at 11:47 1 comment:

I am utterly astounded by I Dave making this statement. This is an utter disaster, the very fact that the EU wanted a 6% expansion in its spending just shows how out of touch with econnomic reality the EU is and it should have been contemplating massive cuts not expansion.

In times past this country has always resisted expansionary powers seeking to politically dominate this country, here we have a Prime Minister actively diverting additional funds from this country to a supra national power and crowing how well he has done.

We know that I Dave has no time for libertarian or constitutional Government otherwise we would have less Government not more, and the people would have spoken in a referendum on Lisbon. He promised this and went back on his undertaking to the British People.

We have nothing less here than the naked excercise of a clique in power in both London and Brussels, if we had a constitution, I Dave would have acted against the Constitution that vests sole power in the British people.He is acting in the financial interests of a supra national power that does not have the active assent of the people.
Posted by Guthrum at 18:06 No comments:

Parking should be free

An open question to anyone about having to pay for parking on the road. Why do we have to a pay?

We already pay road tax for the upkeep of roads, even though only a small proportion of it is actually spent on the roads and other transport infrastructure. So why are drivers having to pay another "tax" on top for the privilege of parking on the road.

Paying for parking on private land (eg. NCP) or in public car parks is different. There the charges help to pay for the upkeep of the site and the wages of the parking attendants.

But paying to park on the road? It just does not make sense. The only reason it exists is so that a council can collect money. A tax in effect.

It can't be to dissuade people from parking otherwise it would be a fine. It can't be to ensure that drivers only park for as long as they need to and no longer. That would happen only if the person didn't need to use their car anymore. The whole point about parking on the road is that the person has come to carry out a time limited task of some sort - shopping, visiting the dentist, going to the bank, etc.

Does paying provide any benefit? Does it mean more people can park? Nope, there are only so many parking places. Does it allow the council to use the money to improve the local environment (better roads, better lighting, better signs, etc.)? Nope, it only goes to pay for parking attendants to go around slapping parking fines on drivers.

So why do we have to pay? Because the state tell us we have to pay and invents laws to fine us when we don't - that why. Can we get the state to change their mind? Nope, because democracy doesn't work. We don't vote for our elected officials on the basis of small issues such as this. We vote on tribal lines. So we are effectively stuck with this stupid situation until the revolution comes. Or until an elected official gets off their arse and realises that they should be doing stuff for their community, not for their own political ends.

Removing parking charges would be a huge benefit to local communities. It would increase the footfall in local markets/shops because people would not have to pay £1 minimum (for example) just to spend 5 mins popping into a shop. An increase in business' profits would mean that more businesses would be attracted to the area, meaning more employment, meaning more stuff to buy and generally making the area more attractive. So parking on the road should be free and parking in public car parks should be free for an initial short period (15 mins) of time.

Going off at a tangent, but that's one reason why supermarkets are so attractive - they have free parking. How many of you go to a supermarket to buy a few items rather than go to their local market to do the same? Think about why you do it. Do you do it because you can drive and park for free or because the prices are cheaper in the supermarket? Do you still do it when the market is closer?

So to reiterate, parking on the road should be free and parking in public car parks should be free for an initial short period (15 mins) of time.
Posted by SadButMadLad at 13:54 3 comments:

An open letter to coalition politicans about DfID

Dear MP,
As a constituent of yours, I wonder if I could ask you for your opinions and those of your party about the Department for International Development.
DfID is one of the few departments that had its budget ring fenced in the Comprehensive Spending Review. Could I ask why the department is considered to be so important that it should be handled in such a way?
Is there an international legal aspect that forces the government to carry on giving aid away, even to those countries that are obviously rich enough to help themselves? I'm thinking about India and China as two particular examples that have nuclear weapons and space programmes. As far as I can gather it's only promises not contracts and the UK could do with the money to help with its own problems.
Is there some moral aspect that makes the Conservatives believe it proper to carry on giving aid away, even to those countries who are corrupt or where there is no state to handle the aid and where the aid does not reach those in need. I'm thinking about Somalia as a specific example. My understanding from a Christian point of view is that it helps to take the timber for your own eye before helping someone with a splinter in theirs. The state of the UK is such that to be able to give aid in the future, we need to ensure that we can survive the short term.
Is there some moral aspect that means that giving aid such as economic development assistance and advocacy/lobbying/marketing/etc is equal in terms of priority to that of giving humanitarian aid in times of disasters? The DfID currently only gives around 10% of its aid as humanitarian aid, with the rest being money to support "worthy" but grandiose projects which provide questionable benefits to the people of such countries. Such big grandiose schemes usually have a very high administrative cost due mainly to corruption, bribes, high salaries, mismanagement, and such like.
A better way to raise poorer countries standards would be to trade with them in an open and free market. By paying for the goods they produce they can use the money to build their economy. Initially they would be on relatively low wages but as they traded and their products were bought by more and more consumers, the employee's wages would increase as more companies got in on the act and paid more to hire from the limited pool of skilled employees.Witness the wage increases that are going on in China.
Do the Conservatives believe that a department such as DfID where waste and mismanagement are endemic as deserving of a continuation of the budget in times when everyone else is cutting back. Examples of waste are that of the £1.2m given by DfID to the TUC, a wholly British organisation and £1/4m on taxis.
I put forward a proposal that DfID should be scrapped in its entirety. All money that would have gone to the DfID should be spread across all other departments to lessen the tax rises that are being implemented to cover the increasing[1] public spending requirements. An insurance fund of 25% of DfID's original budget should be setup in its place to pay for any humanitarian aid when international disasters occur.
Yours,
SBML
[Update: Third para from end updated with missing sentence]
Posted by SadButMadLad at 13:20 2 comments:

Spending Review: Which plan did they use? - Plan 9 from outer space! 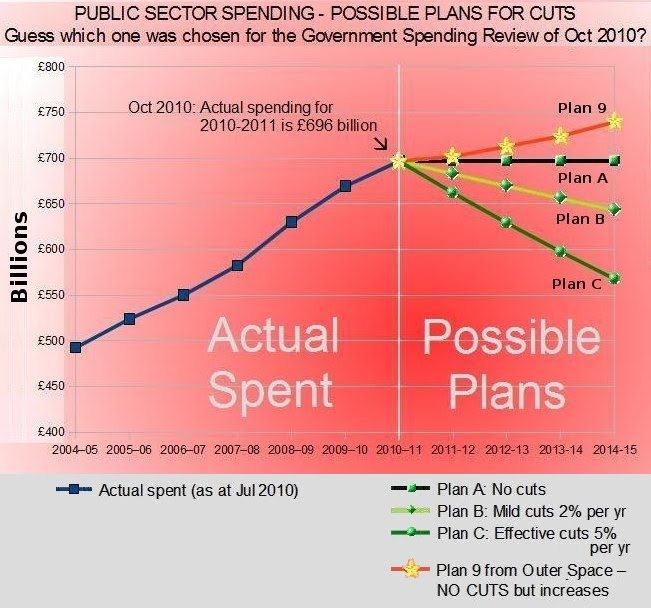 Those geniuses from our in-touch and financially astute coalition government and their brainy, experienced, selfless civil servants came up with a cunning plan for the 2010 Spending Review ™.

Just to remind those from another planet, the immediate problems our country faced as at the time of the Spending Review in October 2010 were:
What was the Con Lib Dem solution? Guess which one of the following spending plans our enlightened masters chose:

Plan 9 from Outer Space - NO CUTS, but INCREASE spending.

' There Are A Suite Of Issues involved'

Type of person using this phrase

I am a very clever person who is now working for a Quango/Fake Charity/Eco-lobby, and I have now mastered the parallel language and buzzwords that mark me out as an 'insider' and politically sound.

This is dreadfully important as far as my Quango/Fake Charity/Eco-Lobby is concerned, and therefore requires oodles of public money to keep myself in the luxury I have become accustomed to

The Gap Between Theory And Reality

I have been to sunny Northampton today to attend to a number of family matters, but having spent five hours in the car, I have been able to listen to the roll out of the Entrepreneurs are going to save us spiel from Con Dem and the slathering we must all work for the state socialists/social democrats.

Nice try Dave but here is the problem, every one of the companies that your spokes person listed this morning as starting in the teeth of one of the last ten recessions was American.

Americans can go to the market and raise start up capital relatively easily, here in the UK it is beyond difficult, the 'Dragons Den' is good TV but not a reality show.

Start ups need backers who inject equity and take a risk, in the UK working capital has been raised by going to the banks, signing a personal guarantee against your assets and leaving your kids as hostages.

You are also required to act as an unofficial unpaid tax gatherer for the Inland Revenue, social worker for staff that it has been increasingly difficult to get rid of,  if they are incompetent or  have zero work ethic. As a Director /owner of the you are subject to the whims and vagaries of the the Companies Act, The Insolvency Act, The Health & Safety at Work Act, Money Laundering Legislation, you can also fall foul of the Department of Business,Innovation & Skills, whose collossal budget and overspending by Mandelson introduces further rafts of regulation, thats before we start bring the EU into the equation.

The average life of a limited company is two years, before that personal guarantee is called in and you are left broke never wanting to repeat the experiance.

As I was driving back, I got a call from a colleague in Northern Ireland, who told me that the Ulster Bank (part of the Nat West farcical Bank) owned by the taxpayer had just pulled the plug, despite having a full order book, it was in the 'Wrong sector'.

All of our cash Dave, has gone to prop up the zombie banks, don't rely on the entrepreneurs until you sort out getting Government of business' backs, and an equity market is flourishing again.